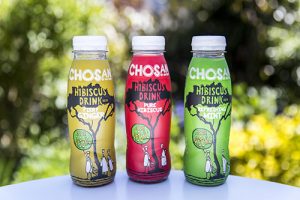 Eliza Jones is the brain behind Chosan. Made redundant following a long career in the not-for-profit sector in England and Africa, this mother-of-one took a leap into the unknown by following her dream, and explained: “I’d often imagined making my own fruit-based drinks, sorbets, and ice creams when I reached retirement age, but redundancy gave me the chance to do it now, and I couldn’t be happier with the results so far.” 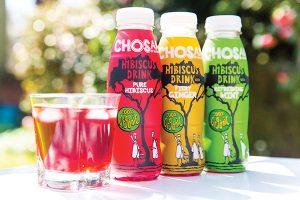 All four drinks in the Chosan range are available in convenient ready-to-go PET bottles. They are produced by an organically certified co-packer in Slovakia with 100 per cent natural ingredients, no artificial additives, preservatives or colourings, plus they are gluten-free, Vegetarian Society approved, and vegan friendly.

Not only are they tasty, but Chosan drinks help maintain a balanced lifestyle. The three hibiscus infused drinks – just 73 calories per bottle – pair well with an array of food flavours, offer a refreshing, thirst-quenching experience, and are an appealing alternative to alcoholic drinks. The Chosan Baobab Superfruit Drink is just 48 calories per bottle, free of refined sugar, and contains only coconut sugar and baobab – with baobab increasingly popular with the health and fitness conscious due to high levels of Vitamin C and potassium.

Inspiration for Chosan came from Eliza’s aunt Esther, who made her own fruit-based beverages in the Gambia for decades. “She loved cooking and being in the kitchen,” said Eliza. “She was very particular about the quality of her ingredients and always followed very traditional recipes. She’s now 93 and only recently stopped making her own drinks!” With these memories firmly in mind, Eliza devised the recipes from her kitchen at home, found her Slovakian producer, developed the brand, and set about selling the products. 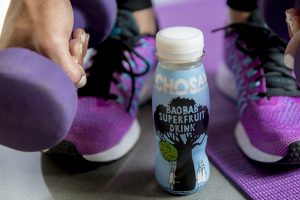 Along with the natural goodness of Chosan’s drinks, there’s also an ethical element to the brand. Harking back to Eliza’s former career and passion for the charitable sector, five pence from every Chosan bottle sold will go to African food producers to help improve their standard of living. Eliza said: “It’s our way of showing our appreciation to the continent which provides us with our fantastic, delicious ingredients.”

In addition to the new Ocado listing, the Chosan range of drinks is now available from wholesalers and on the shelves of numerous independent grocery, fine food, and health food retailers across the UK. Plus plans are already in the works for more variants and to extend the brand beyond beverages.