Sidekick, the London-based hot table sauce creator and manufacturer begins its drive to target food lovers in the UK with its new range of sauces. Created from a passion for developing new flavours and free from artificial additives, the range of hot sauces – a spicy accompaniment to meal times – aims to bring adventure to the table and covers the full range of the KICK-O-METER to suit all food enthusiasts.

The range is available for a £3.90 RRP per bottle and the company sells direct online but is looking to work with quality artisan food stores (both offline and online) and as well as via a nationwide distributor.

Founded by James Bryson, hot sauce addict and culinary experimenter, the creator spent a year refining recipes fulfilling requests as far afield as Brazil before he quit his career as a finance manager in the consumer goods industry to officially launch the company. Sidekick made its first public appearance at The Festival of Heat in Shoreditch in September 2015 where it sold over a bottle a minute. Sidekick was chosen by both of the UK’s top chilli subscription clubs as their sauce of the month in their October 2015 boxes.

The company will also be showcasing its range of hot sauces at the Taste of London in November 2015 with free sampling, opportunities to win free bottles of Sidekick sauce and not for 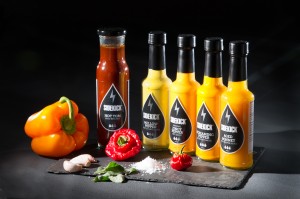 The self-funded business works with a private label producer in Hampshire with operations run from a 36 sq m commercial unit in Dorset.  By early next year the company will have the capacity to process up to the 3,000 units per week.

The range will be rolled out in stages with the first core range of carefully curated creamy, zingy peppery hot sauces available to the trade to showcase Sidekick’s roots in experimenting in the kitchen to customers.

Mellow Pepper (Not So) Hot Sauce: This intense peppery deliciousness provides a warm heat with a smooth finish and transforms British classics such as pies, roast chicken and chunky chips.

Original Zingy Pepper Hot Sauce: This deep peppery taste is chased by a rolling heat and smooth finish which is best shaken over eggs, dabbled on grilled meats or perking up veg.

Screaming Pepper Extra Hot Sauce: You’ve been warned! This powerful peppery creation accompanies the fierce heat of none other than the hottest chilli in the world, the Caroline Reaper – ideal for the food lover searching for the ultimate kick!